The Softwoods Working Group (SWG) and The Murray Region Forestry Hub (MRFH) are calling for substantial funding to support research into finding an effective biological control for blackberries not just in the hub’s area, but across eastern Australia where they are a massive problem.

Executive Officer Phil Clements of SWG and MRFH said a government coordinated, whole-of-landscape approach, across all land tenures, was urgently needed to deal with the serious blackberry problem.

“We want to reduce the impact not only on the pines, but also on our farming neighbours, and we will work with them to get real action on this as soon as possible,” he said.

The MRFH is one of 11 Commonwealth funded regional forestry hubs set up across Australia to explore the impediments and opportunities to developing the timber industry.

Mr Clements said the MRFH had prepared a strategy to assist with industry recovery and development during the next 30 years, which includes a range of initiatives to ensure that the highest possible productivity could be achieved.

“One area of concern is that competition caused by infestations of blackberries – a weed of national significance – would reduce the efficacy of these initiatives,” he said.

“This is a severe problem for timber-producing forests and plantations, National Parks, farms, roadside reserves and along creeks and gullies.

“We are aware that there is some good research work being undertaken into biological control, but these efforts are not being resourced anywhere near sufficiently or progressing anywhere near as quickly as the problem warrants. The long term, permanent solution is now beyond the reach of chemical control alone.”

Chair of MRFH and SWG Peter Crowe said blackberries were a huge impediment to maximising production in pine plantations and he estimated production losses could be in the order of 5 to 10 per cent.

“As well as impacting the productivity of the pine plantations, blackberries contribute to the fuel load in pine plantations and native forests, restrict access for harvesting and fighting fires, and make road and trail maintenance a much greater task,” Mr Crowe said.

“With the World Bank estimating that global timber demand will quadruple by 2050, Australia needs to take every step to secure and maximise its timber resources to ensure the supply of renewable, carbon-storing, forest products. Imports are no longer guaranteed and the potential adverse, long-term impact on Australia is extremely serious.

“The impact of blackberries on timber production is only part of the story. When added to the presumably similar impacts and costs across other land tenures, the numbers are compounded. Add in the environmental costs and we have a disaster in the making. We need to accelerate the efforts to tackle blackberries now.” 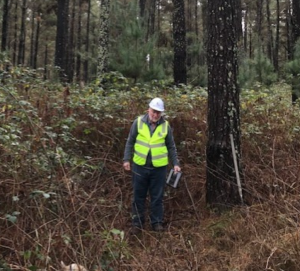